Driving from Berlin to Kristiansand (Norway)

Our journey to Norway from starts from Berlin, in late June, 2022. We drove a van from Berlin through Denmark, took a ferry from Hirtshals and then to Kristiansand.

We left Berlin around 3pm, drove through Hamburg where we took a 30 minute break to pickup a jackery and solar panels in preparation for wild camping and living off grid for the next 2 and half weeks. It took us about 6 hours to drive from Berlin to the Danish border. When we got to Denmark it was quite late so we decided to park at the first stop we found. Luckily, Denmark has a lot of rest stops which were very nice and cozy. We pulled up to one of the parking spots which had a table and bench and a garbage bin. 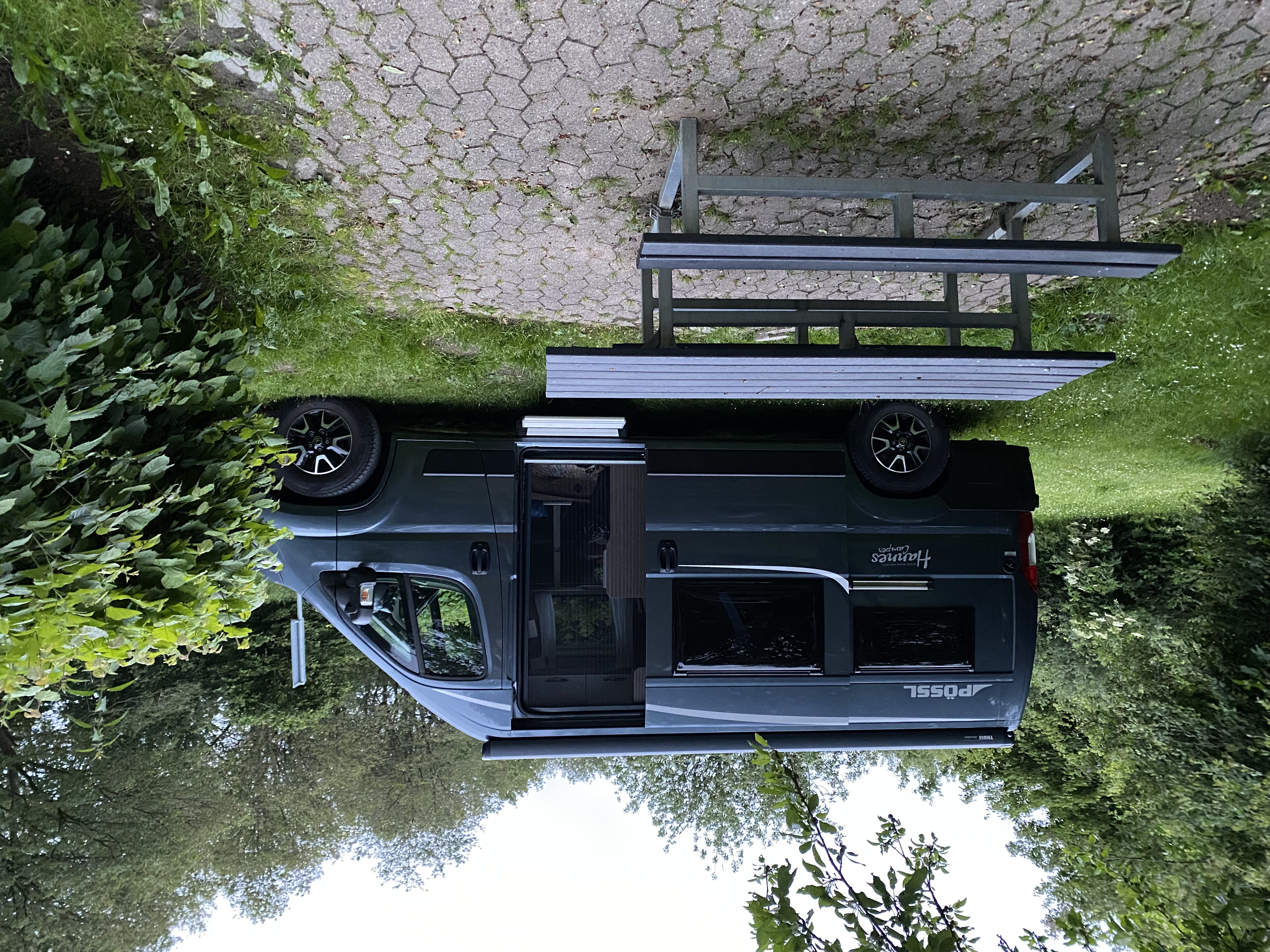 We immediately checked our surroundings and went straight to bed.  In the morning, we took a walk to the lake next to the rest stop, had breakfast and continued the journey towards Hirtshals where we’d take a ferry to Kristiansand, Norway, the next morning.

It took us about 3.5 hours to reach Hirtshals. We decided to go to a beach where cars could drive. It was fun in the begining until we got stuck. Mainly because we didn’t see a hole in the ground. It took us about 30 minutes to get out with the help of a rug and digging out as much sand as possible. 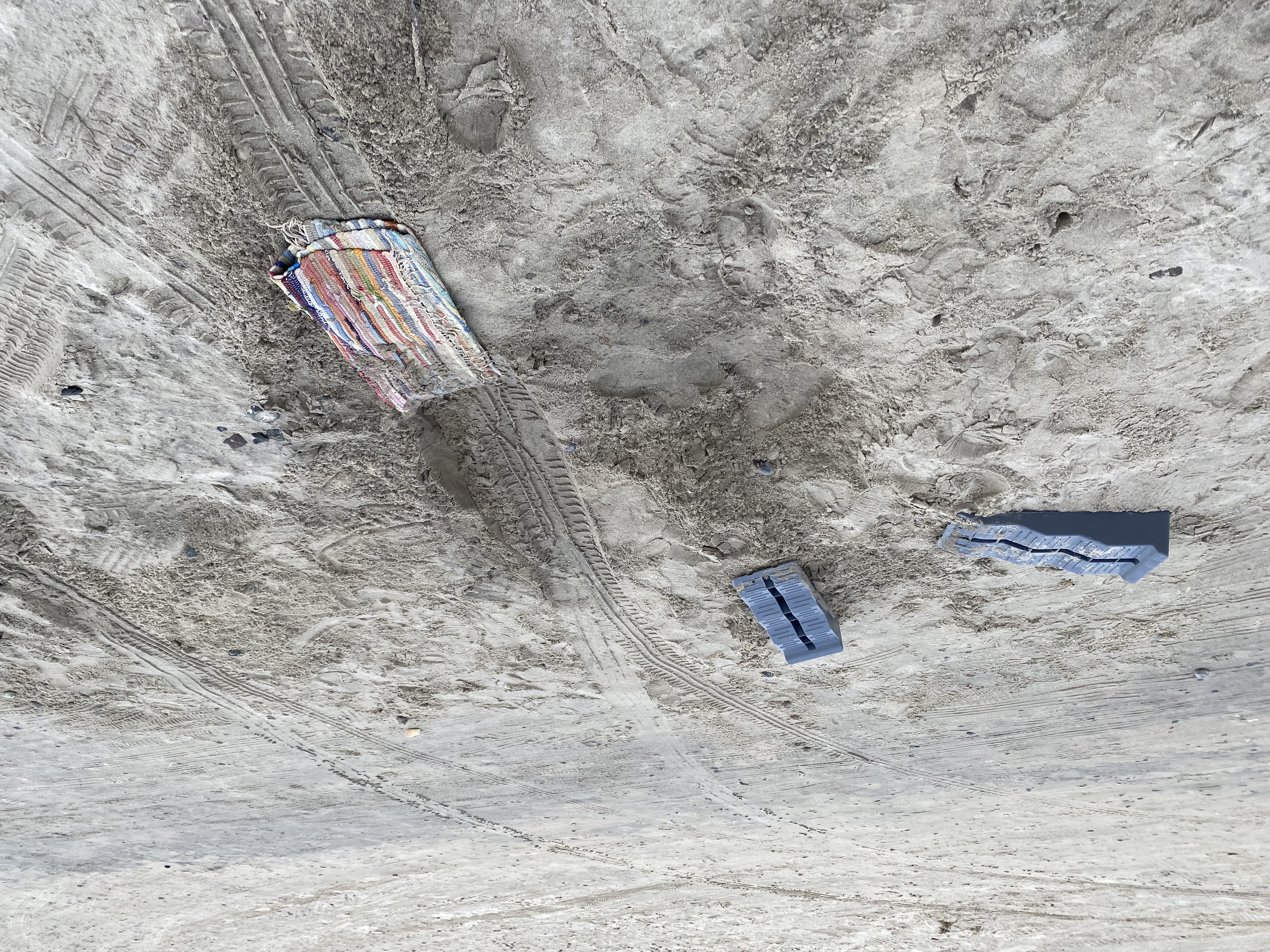 We walked the beach and decided to find a camping spot for the evening. We used the app Park4Night, and found a hidden spot. This app would end up being the most used the entire time in Norway. It was a great camping spot and even took a 30 minute walk in the nearby woods. We made dinner and looked forward to arriving in Norway the next day.

In the morning, we drove to the ferry checkin. We booked the fjordline ferry. Checkin was smooth and fast. We arrived an hour early so we waited till it was time to drive aboard the ship. We drove in, parked the van and headed upstairs to take a seat. The ferry was large and there was plenty of seating. The ride took an hour and half and in no time, we were at Kristiansand. We drove off the ferry and started driving towards Lyseboth. The goal was to hike the Kjerag the next day.

The drive to Lyseboth was an experience on it’s own. The roads were windy and small. It was a one lane road, but meant for 2 cars in both directions, as a result, cars had to communicate to pass, either by driving to the far side or reversing to make way. We drove up mountains, and rocks with very steep accent and descents. Full attention is required while driving to lyseboth. The drive itself, was very scenic, we were quickly greeted by views of the Norway we were excited to see. The mountain formations and lakes at every turn was overwhelming and we took in each view calmly. It was my first time seeing such an amazing landscape.

We arrived in Lyseboth and found a spot for night. We were the only van in the vicinity and enjoyed a quite and lovely night in a valley surrounded by the wall of a mountain. We were a bit exhausted from all the driving and went to bed early in preparation for hiking Kjerag in the morning. 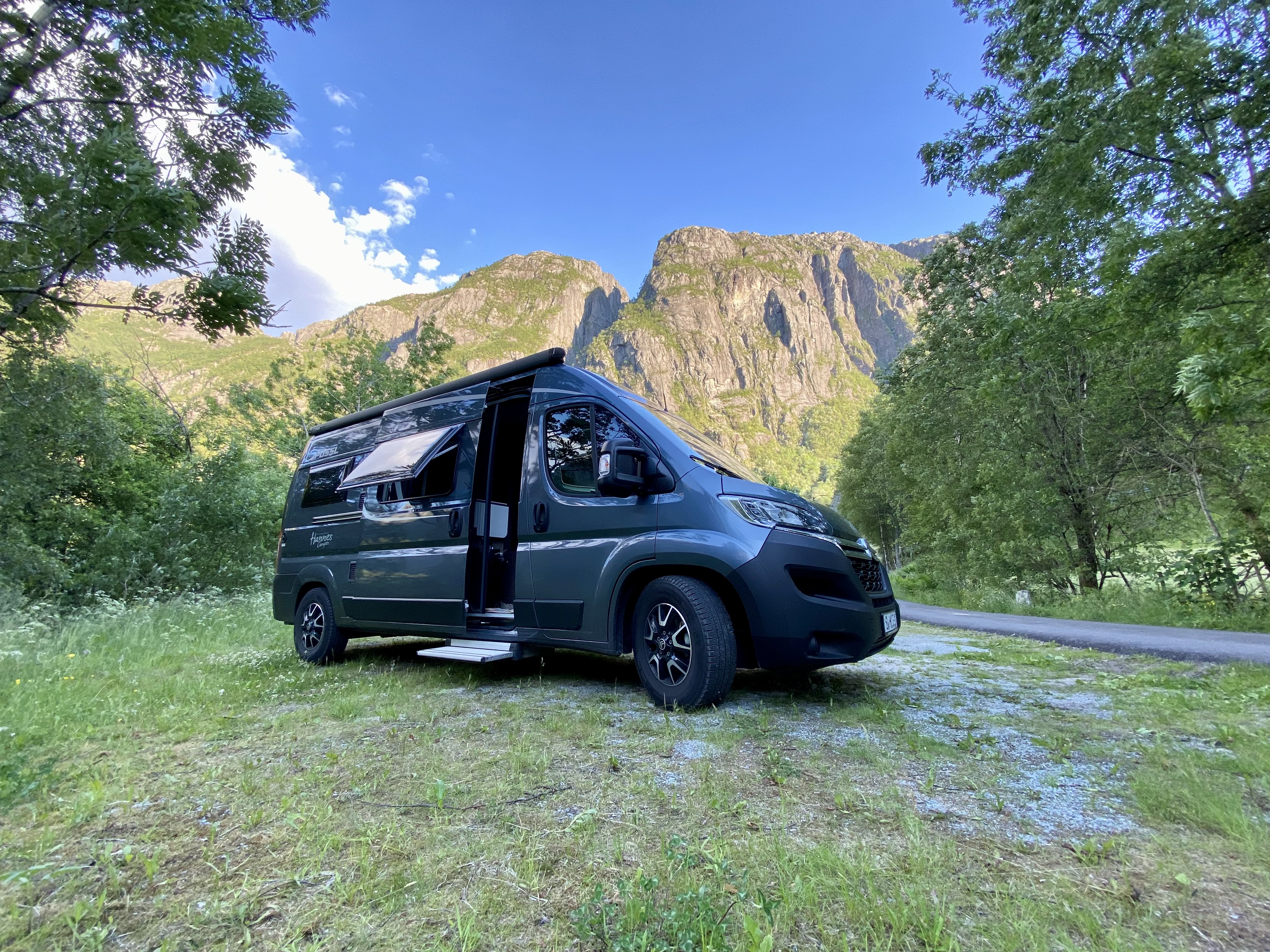 After a quick Muesli breakfast and some hot tea and coffee, we put on our hiking shirt and pants and drove to the parking spot. It was a windy road which was beautiful to drive on but probably not too great for fuel efficiency. It cost about 50 euros to park for the day. There’s no camping allowed. No overnight stay. The parking cost is quite high, and there’s almost no other parking alternative. You could park far from the parking lot, and walk to the start of the trail, but would probably take you 1-2 hours and walking on the asphalt road with oncoming vehicles who might not see you due to the sharp bends might not be a good idea. 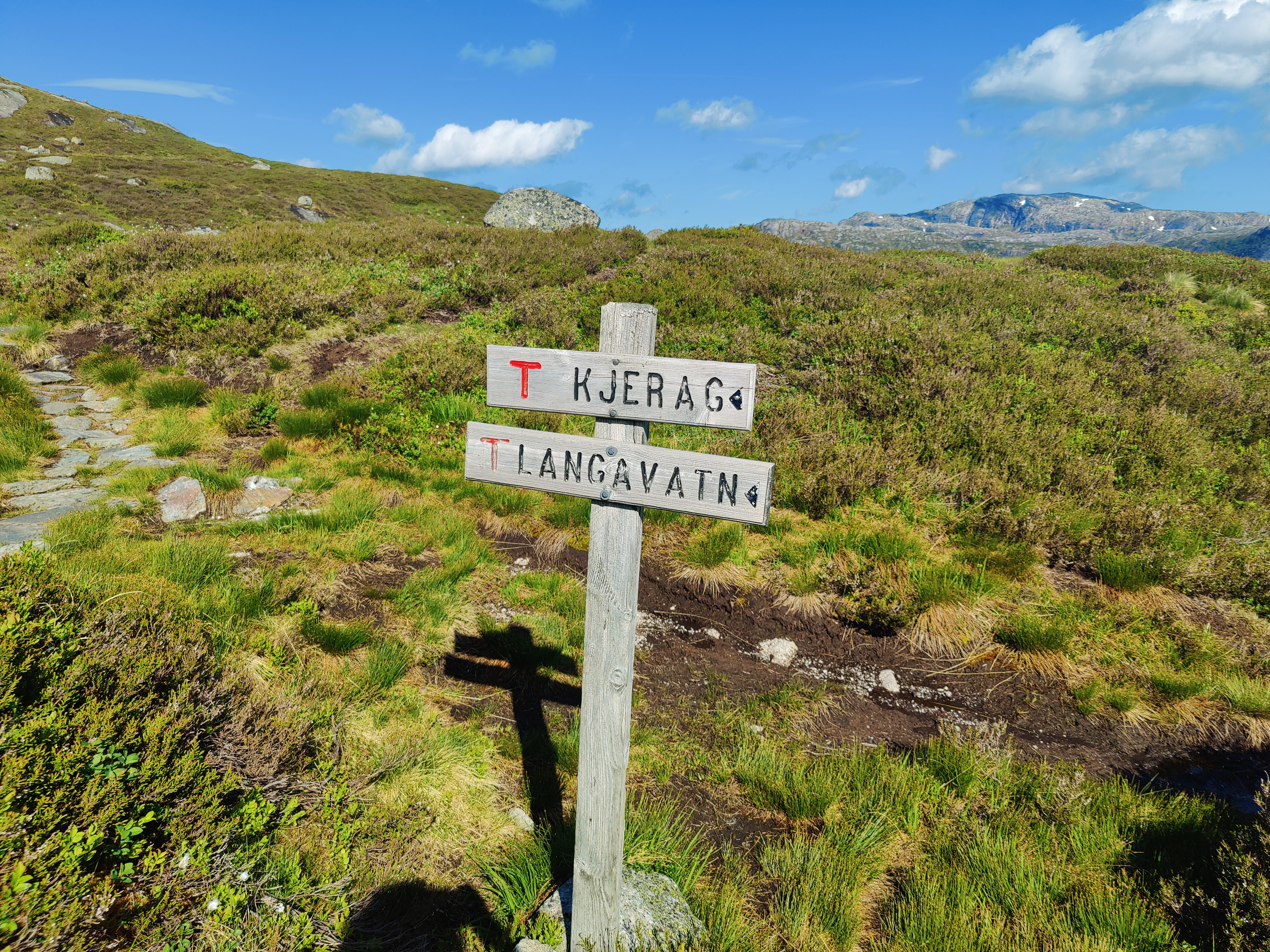 Kjerag is a mountain in the Sandnes municipality in Rogaland county, Norway. The 1,110-metre (3,640 ft) tall mountain sits on the southern shore of Lysefjorden, just southwest of the village of Lysebotn. Its northern side is a massive cliff, plunging 984 metres (3,228 ft) almost straight down to the fjord; a sight which attracts many visitors each year. Another tourist attraction, the Kjeragbolten, is a 5-cubic-metre (180 cu ft) stone wedged between two rocks is located on the mountain (source wikipedia).

The beginning of the hike was very steep. It was uphill for the first 30 minutes and I quickly got tired and almost out of breath. I had to pause a few times to catch my breath. The last time I hiked up a mountain was the previous year in Madeira so I was in for a challenge.

The weather was good and warm, however, it got pretty windy the higher we got. The route was rocky, steep, muddy and towards the end was covered in snow. The trekking poles were great towards the end and helped with stability on the snow.

After almost 2 hours and a half minutes of hiking, and an elevation gain of about 700 meters, we arrived the top, and were greeted with amazing views.

We took in the view, enjoyed a snack, took pictures and were ready to head down. We did not stand on the famous rock. I’m generally afraid of heights, and had no intention of taking a picture on the rock. There was a small queue to stand on the rock, and a lot of folks seemed to enjoy it.

We started our descent after a 20 minute break. The descent was much easier, however, some sections were a bit hard on my knees. The trekking poles were again very helpful. Some sections required going down on all fours.

We completed the descent in about 2 hours. The entire hike took 4:30 hours, with a distance of 13km, and an elevation gain of 680m.

The kjerag hike is not easy. It is upper moderate to difficult, especially if you’re not a frequent hiker. There were quite a number of kids on the trail, so it’s manageable. I would rate it a hard. Mainly because of the very steep climbs and technicalities in climbing in some sections. I would recommend this hike.